By Henry I. Miller and Drew L. Kershen

Consumers of organic foods are getting both more and less than they bargained for. On both counts, it’s not good.

Many people who pay the huge premium—often more than 100%—for organic foods do so because they’re afraid of pesticides. If that’s their rationale, they misunderstand the nuances of organic agriculture. Although it’s true that synthetic chemical pesticides are generally prohibited, there is a lengthy list of exceptions listed in the Organic Foods Production Act, while most “natural” ones are permitted. However, “organic” pesticides can be toxic. As evolutionary biologist Christie Wilcox explained in a 2012 Scientific American article (“Are lower pesticide residues a good reason to buy organic? Probably not.”): “Organic pesticides pose the same health risks as non-organic ones.” 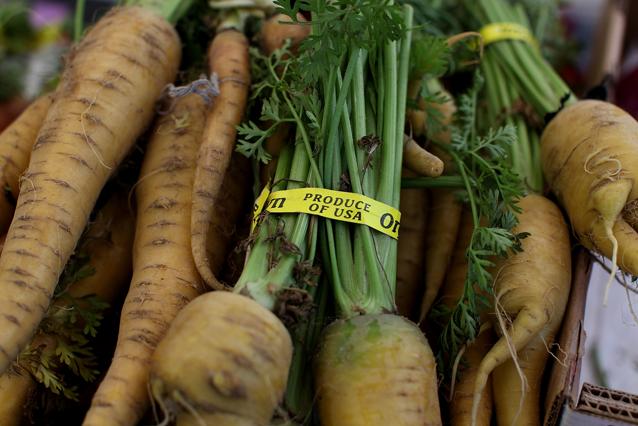 SAN FRANCISCO, CA – JUNE 13: A label stating ‘Produce of USA’ is wrapped around a bunch of organic carrots at a farmers market on June 13, 2012 in San Francisco, California. (Photo by Justin Sullivan/Getty Images)

Another poorly recognized aspect of this issue is that the vast majority of pesticidal substances that we consume are in our diets “naturally” and are present in organic foods as well as non-organic ones. In a classic study, UC Berkeley biochemist Bruce Ames and his colleagues found that “99.99 percent (by weight) of the pesticides in the American diet are chemicals that plants produce to defend themselves.” Moreover, “natural and synthetic chemicals are equally likely to be positive in animal cancer tests.” Thus, consumers who buy organic to avoid pesticide exposure are focusing their attention on just one-hundredth of 1% of the pesticides they consume.

Some consumers think that the USDA National Organic Program (NOP) requires certified organic products to be free of ingredients from “GMOs,” organisms crafted with molecular techniques of genetic engineering. Wrong again. USDA does not require organic products to be GMO-free. (In any case, the methods used to create so-called GMOs are an extension, or refinement, of older techniques for genetic modification that have been used for a century or more.) As USDA officials have said repeatedly:

Organic certification is process-based. That is, certifying agents attest to the ability of organic operations to follow a set of production standards and practices which meet the requirements of the Organic Foods Production Act of 1990 and the [National Organic Program] regulations . . . If all aspects of the organic production or handling process were followed correctly, then the presence of detectable residue from a genetically modified organism alone does not constitute a violation of this regulation. [emphasis added]

Putting it another way, so long as an organic farmer abides by his organic system (production) plan–a plan that an organic certifying agent must approve before granting the farmer organic status–the unintentional presence of GMOs (or, for that matter, prohibited synthetic pesticides) in any amount does not affect the organic status of the farmer’s products or farm.

Under only two circumstances does USDA sanction the testing of organic products for prohibited residues (such as pesticides, synthetic fertilizers or antibiotics) or excluded substances (e.g., genetically engineered organisms). First, USDA’s National Organic Production Standards support the testing of products if an organic-certifying agent believes that the farmer is intentionally using prohibited substances or practices. And second, USDA requires that certifying agents test 5% of their certified operations each year. The certifying agents themselves determine which operations will be subjected to testing.